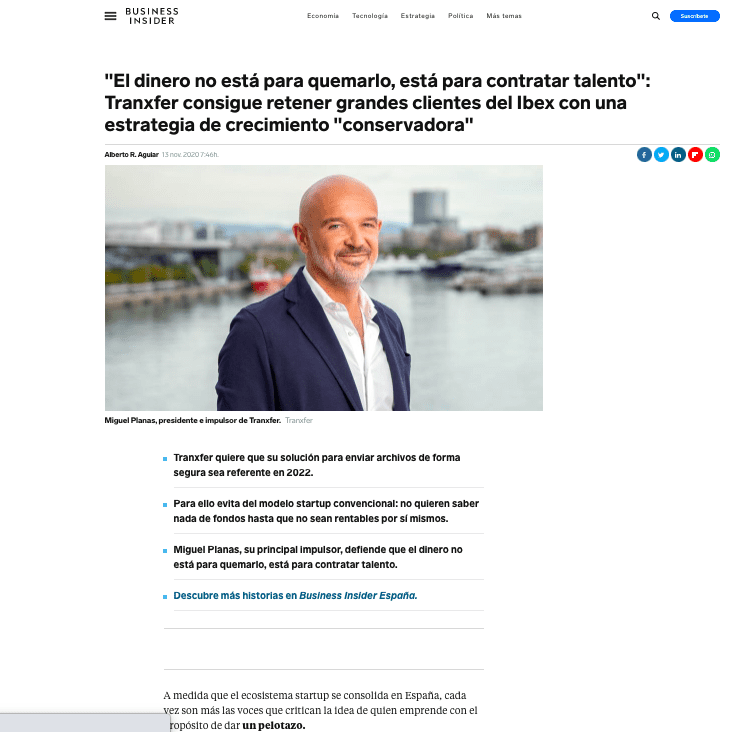 "Money is not for burning, it is for hiring talent": Tranxfer manages to retain large Ibex clients with a "conservative" growth strategy

A few days ago, Business Insider magazine did an interview with Miguel Planas, CEO of Tranxfer, where he revealed the "conservative strategy" that the company uses to reach its goal of 2022, to be a world benchmark.

As the startup ecosystem consolidates in Spain, there are more and more voices that criticize the idea of who undertakes with the purpose of giving a ball.

Tranxfer, a Spanish startup that specializes in solutions for sending and receiving files through secure channels, wants to be a world benchmark by 2022.

Its main promoter is the businessman Miguel Planas, president of Iris Venture Builder. He exudes ambition in an interview with Business Insider Spain, in which he also surprises when he reveals what his "conservative strategy" to meet your goal.

“We prevent other funds from entering. Although a fund enters with a minority stake in the company, on many occasions they impose draconian conditions”, he reveals. «They inject huge amounts of money from which a very high percentage ends up burning. And both funds and executives are accomplices of this.

Without pointing fingers at anyone, Planas assumes that his opinions may be controversial in a year in which the startup ecosystem can boast figures thanks to the forced digitization caused by the COVID-19 pandemic. Even in more consolidated companies, such as Idealista, million-dollar corporate operations have been registered that have marked a before and after.

But Planas insists. "Money is not there to burn," he says. "When the money that is invested is one's own, it is managed much better." That is why Tranxfer sent a recent press release in which it defended having obtained an injection of a million and a half euros. Here's a catch: One million came from his parent, Iris. The 500,000 euros are a bank loan.

"Money only serves to hire talent", recalls the businessman, who also summarizes that when there is too much money it helps "the talent that exists to decrease." "With scarce resources, people are more talented."

Planas believes that when a fund enters an early-stage startup, many times the founders they lose control. Sometimes, when everything ends in bankruptcy, the founders and the fund are not able to understand each other.

In any case, this does not mean that Tranxfer rejects the entry of funds. But at least, for the moment, no. “Only when we are making money. When help scale globally«.

“It seems that there are a lot of people who create companies to sell them. At Iris we started in 2011 and we still haven't sold one. Obviously, selling is reasonable when on a personal level it is a legitimate question because you have other personal or professional projects. Or because the company has a size for which you do not see yourself in the car, and Do you think another actor can do it better?«, rectifies.

But the idea of Tranxfer is "to make money, the sooner the better" and to grow sustainably.

A strategy with other types of risks

Precisely adopting this somewhat "conservative" strategy has allowed them to enjoy credit and financial investment, as well as attract —and retain— to large clients of the Ibex 35, among which Naturgy stands out.

But the fact of not growing like other more conventional startups do, burning money and injecting monumental amounts, can lead to another series of risks. One is that another firm will jump ahead by providing a similar solution on the market that scales much faster.

“We have that terror. By not having financed us, by go at our pace, can someone step forward. But I think the risk of going crazy is greater: we feel more comfortable with this model. "It is a conservative strategy," admits Planas. "But customers also like it: they feel comfortable seeing our track record."

In short, the businessman asserts: "We're not twenty-somethings."

How do we envision the evolution of the workspace in the next 2 years?

At Tranxfer we envision an evolution of the workspace that could be summed up in three elements: experience and productivity, confidence in the cloud, and security and compliance. Now more than ever users can connect across multiple devices which can lead to data leakage in the absence of Zero Trust. This concept leads to a change of mentality in the IT part so that all devices are considered as possible threats and can be controlled. We believe that there will no longer be a place for “it is not cloud” therefore companies will increasingly work remotely. Zero trust will be a necessity.

This technological transformation has been accelerated due to the pandemic but it was inevitable that it would happen.

This month we have appeared in more magazines such as Business Insider. 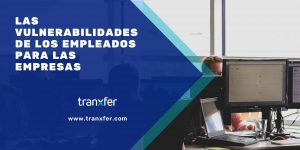 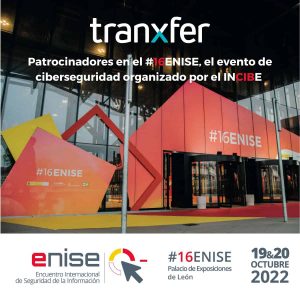